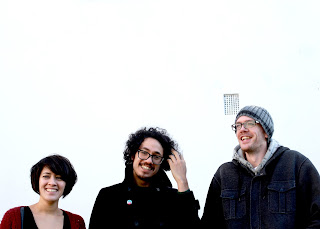 With Studio Ghibli season in full swing over on Film4 this Easter, it seems rather apt that London trio Mayors of Miyazaki have dropped their latest single around this time (I haven't been able to confirm whether they are named after the famed Japanese director Hayao Miyazaki, but for argument's sake, I will assume that they are). "Human Resources" is a short, burst of shifty-punk that crams more musical ideas into eighty-two seconds than most bands manage to do in 282. If you like your rock music unconventional, unfiltered, and bordering on Deerhoof-esque madness, then you'll find something to like here.

The song will feature on the album "Holy Cop", which will be released on June 3rd.

Posted by Christopher McBride at 17:14