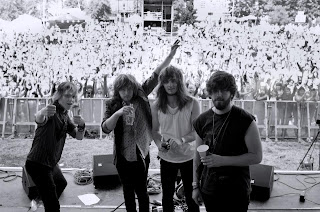 There has been much excitement on Twitter recently about the news that septuagenarian rock band The Rolling Stones are to lay off the cocoa for one night in order to headline this year's Glastonbury Festival. Even though it's been more than fifty years since they first crashed into the public consciousness, it's nice to see that their influence is still being felt on the next generation of young hopefuls looking to soar through the musical ranks.

This brings us on very nicely to Sheffield quartet Blue Lip Feel. They've been building up a following in recent months in both their hometown and in London, and are due to support Tribes on their upcoming UK tour in April. They've recently debuted a brand new song "Hiring Mr Know", which is available as a free download, and has a classic rock sound that is very much indebted to the archetypal sound of Jagger, Richards et al.

So are the young band really the devout disciples of a group three times their age, or did they just listen to Primal Scream's "Give Out But Don't Give Up" on repeat growing up? Either way, I'm sure there'll be much for them to enjoy if they head to Worthy Farm this June.

Photo of Blue Lip Feel is © Scott Hukins
Posted by Christopher McBride at 19:24