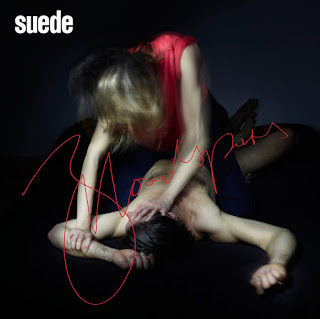 The story of Suede has been recounted on many occasions, but here's a quick summary of how they got to where they are now - the band first achieved attention in 1992 when the graced the cover of Melody Maker before they'd even released a single, and released two critically acclaimed albums before the departure of guitarist and co-songwriter Bernard Butler during the recording of "Dog Man Star". They replaced him with a 17-year-old guitarist and a keyboardist and released three more albums under this line-up, before splitting up in 2003 following the release of the much maligned yet underrated "A New Morning". The band members went on to different project before the post-1994 line-up reunited for a charity gig in 2010, turning it into a full reunion the next year.

Now, Suede have released their sixth studio album "Bloodsports", their first studio album in 11 years, and their first album with Ed Buller producing since "Coming Up" in 1996. With such a stellar back catalogue of hits juxtaposed with the long gap between releases, the question is whether the band will be happy to tread on past sounds, or whether they have progressed their material beyond what they have already recorded.

At first, the answer appears to have been a little bit of both. The opening track "Barriers" is unmistakably a Suede song, containing the guitar riffs and synth flourishes that mark some of their best songs, yet it also feels like a logical progression from lead singer Brett Anderson's most recent solo album. Likewise, "It Starts and Ends With You" is up there with some of the best pop moments of the band's career, yet has a remarkably original structure - depending on what way you approach the song, it is either entirely chorus-less  or contains nothing but choruses. Plus it has one of the strongest guitar outros the band has ever committed to tape.

On the less pop-orientated end,"What Are You Not Telling Me" is a percussion-less conspiracy ballad, dominated by multi-tracked vocals which reach a paranoid conclusion. It does bear some sonic resemblance to their song "Daddy's Speeding", and it underpins a key flaws with the record.

It is incredibly familiar.

Take "Snowblind" for example. It's a good song, that's for sure, but it does sound quite similar to "Starcrazy". "For The Strangers" has lyrical nods towards one of their early b-sides, "To The Birds", and ends in a similar fashion to "By The Sea". "Hit Me" sounds like it has been pieced together from the best bits of "She", "Beautiful Ones" & "Electricity" to create a wonderful Suede collage. And it's hard to listen to "Sometimes I Feel Like I'll Float Away" without hearing "My Insatiable One" playing in the back of your head. Of course, there's nothing wrong with revisiting sounds as long as the end product is better than the original songs, it is just unfortunate that this is not always the case on "Bloodsports".

And even the unfamiliar has the potential to be disappointing. The slow-burning "Always" doesn't have a direct reference point amongst other Suede material (pun unintentional), but is the weakest song on the album. Listen carefully to the last few seconds of that song. It sounds like a Brett Anderson has been temporarily replaced by a Dalek. And on certain tracks (step forward "Sabotage" and "For the Strangers"), some of the guitar lines sound unmistakably U2-esque. For a band that has great pride in being regarded as outsiders, it is rather unsettling to hear them sound like the most commercial rock band in the world.

Don't get me wrong, "Bloodsports" is a good album. In parts, it is even fantastic. Brett Anderson hasn't sounded this good on record for at least fifteen years, and it contains songs that any other band starting out in 2013 would kill to have written. It is a much better album than "A New Morning", and is on a par, and possibly even better than "Head Music". The problem is that when you've released three albums as iconic and faultless as "Suede", "Dog Man Star" & "Coming Up", even a very good album is going to feel like an anticlimax. "Bloodsports" is great, yet it doesn't sound like the classic album that it had the potential to be.

Highlights: "It Starts and Ends With You", "Barriers", "Hit Me".