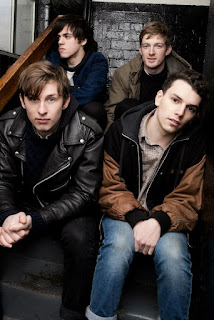 Did you get the telegram that Radio 1 boss George Ergatoudis sent out at the start of the year? Well to summarize, the mythical, long lost instrument, known colloquially in the dark old days as the "guitar", has been unearthed from a deep, dark country known as "The Interwebs", and their luxurious tones will soon be heard on a best-sellers list near you (preferable one which is aired between 4 and 7 p.m on a popular national radio station). Groovy.

It's under these conditions that a band such as Birmingham's Dumb can thrive. Their website boasts a backroom team that would put Lady Gaga to shame, including two PRs and a blog czar, and they've already notched up some airtime on the aforementioned radio station of the yoof. This is despite the fact that according to their Facebook page, they've only been a going concern for two months (although a quick internet sweep reveals that some of the members were in a group called The Carpels. No, me neither).

Although I'll try not to be too dismissive of them. After all, their first single, "Dive", is actually pretty good. The song mixes the moody indie-rock that worked so well for Chapel Club on their debut album with the scuzzy, youthful sound of Yuck. It's a strong debut from a group who are well on their way to honing their sound. Just don't be surprised if they end up signed to a major and hogging the airwaves of Radio 1 by the end of the year.

"Dive" will be released on March 31st on newly formed One Beat Records.

Posted by Christopher McBride at 22:07

Email ThisBlogThis!Share to TwitterShare to FacebookShare to Pinterest
Labels: Birmingham