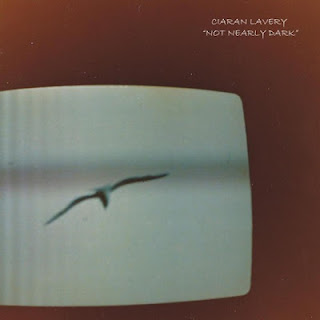 
Aghagallon-born Ciaran Lavery has been drifting about the Northern Irish scene for a few years now, firstly under his Captain Kennedy moniker and now under his legal name. The culmination of this work is is debut album, "Not Nearly Dark", an album which rather appropriately drops just as the days are beginning to get much longer.

The central sound of "Not Nearly Dark" is rather paradoxical. On the one hand, it sounds like it is a very intimate affair, as if Ciaran Lavery alone is in the room with you. Yet the album is largely a band-orientated one, with Mr Lavery being augmented by a traditional line-up, as well as strings and brass. This format is best exemplified by the opening and best track of the album "Little More Time", a folksy little number that whilst expansive, is underpinned by the gentle strum of the acoustic guitar.

The majority of the album follows this format, with a couple of exceptions. "Awful Love" starts with a simple kick drum/guitar combo which slowly builds up throughout the song, as if it's about to erupt into a cataclysmic anthemic climax. Instead, Lavery pulls the rug from under the listener's feet and allows the song to segue into the short organ interlude "Rest", before tapering out altogether. Normally allowing a song to end with a whimper rather than a bang would be somewhat unwelcome, yet on an album as vulnerable as "Not Nearly Dark" this seems to be somewhat appropriate.

The voice that carries the album is one that seems to match the instrumentation of the album. Ciaran Lavery has a voice that sounds somewhere in between E from Eels and Tom Waits, the sort of impure, rugged  voice that could only come about from a life of emotional fragility. It is on tracks like the closing moments of "Follow You Down" that this really comes to the forefront.

"Not Nearly Dark" is an album that could best be described as dependable. If you like your songs folk-flavoured, expansive whilst lo-fi, and with emotions at the front and centre, then you will find a lot to like in Ciaran Lavery's debut album. And with similar offerings by artists like Ben Howard riding high in the charts, there couldn't be a better time for it to be released.

Posted by Christopher McBride at 22:57