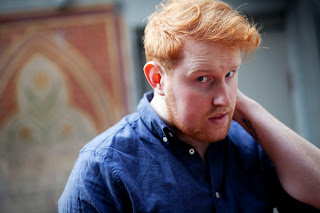 This blog first became acquainted with Dublin based singer-songwriter Gavin James last year, after he played a short three song support slot in The Empire, Belfast for Duke Special. Despite being a virtual unknown, he charmed the crowd immensely, and even managing to get them singing along to his self-penned songs by the end. Since then, he has built up a great reputation in Ireland, gaining support slots with Ingrid Michelson and even winning the Meteor Choice Song of the Year award for "Say Hello".

Having won over his home country, Gavin James has set his sights of the United Kingdom, and with an upcoming tour as the main support for breakthrough Irish artist of the moment Kodaline, he should be able to delivery on his early promise. To mark the tour, he has released his first track to introduce him to the wider world, "Carolina."

Comparisons to Ed Sheeran are particular apt, given that both artists share a similar image and have a familiar sound. Gavin James has a much more powerful voice though, one which calls to mind some of Damien Rice's songs. "Carolina" has build upon the singer's early promise, and hopefully should pave the way for greater things yet to come.