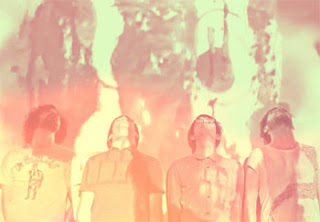 After falling off the radar for what seemed like years, Belfast based dance-rock group Ed Zealous made a triumphant return last year with the brilliant "Diamonds For Eyes", and followed it up with a remix package featuring some of the finest musicians from Northern Ireland, including Kowalski, Not Squares and And So I Watch You From Afar. The group have been preparing their much anticipated debut album for some time, but for the moment, the focus is on their latest single "Medicines", which will be released through Label Fandango next month.

And if you haven't taken notice of Ed Zealous before now, then this song will give you more than enough reasons to do so. "Medicines" is a big, dirty slice of scuzzy electronic rock with a great pop hook at its heart. It sounds like a heady mix between "Tongue Tied" by Grouplove "We Are Rockstars" by Does It Offend You, Yeah, which isn't unsurprising seeing that Eliot James, who produced the latter, is also involved with this one.

"Medicines" will be released on 8th April.

Posted by Christopher McBride at 21:35