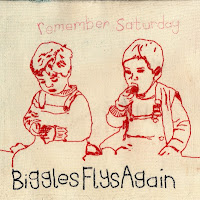 Biggles Flys Again is the brainchild of Dublin based singer/songwriter Conor Deasy, which aims at creating enjoyable three minute pop gems. The first single taken from the album, "Friends", is a great example of this approach. The song is a piano-pop ditty about the value of friendship despite its various foibles and mishaps. It's a tune devoid of pretension and naval-gazing, yet filled with great charm and wit, which makes it such a joy to listen to.

"Friends" is taken from the album "Remember Saturday", which is released on March 30th, and is available as a free download.

Posted by Christopher McBride at 14:32