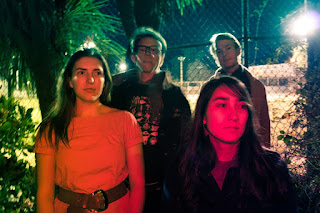 If there's one thing that pop music needs a lot more of, it's the use of a melancholy whistle hook. Last week, we featured Little Bear and their folk influenced "Devil Is A Songbird". Now, we travel across the sea, where we find California based quartet Trails & Ways.

Their latest single, "Border Crosser", tells the tale of how their lead singer's grandparents moved from Europe to America in the 1940s. The song, which has the production feel of an 80s college-rock hit, contains a rather poppy chorus, lyrics in German as well as English, and most importantly, a massive whistling hook that is both melancholic, yet hopeful simultaneously.

"Border Crosser" is taken from the debut album by Trails & Ways, "Trilingual", which will be released next year.  It is available as a free download in exchange for a Facebook like.

Posted by Christopher McBride at 19:33