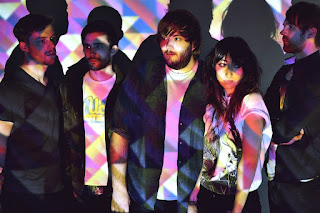 Having grabbed our attention over the past 12 months with three fantastic singles, including the wonderful "Electric" back in April, there was a flurry of anticipation for the release of Belfast based quintet Runaway GO's latest single, which debuted earlier this evening. And true to form, it's a corker of a tune.

Produced by Jonathan Shakhovskoy, who has worked with artists as diverse as Beady Eye and Shakira, "Jump Start" sees the band playing up to their strengths. Their trademark girl-boy vocals are very much intact, with the double team of Fiona O'Kane and Dave Jackson both complimenting and offering a distinct contrast. Their penchant for heavy guitar riffs remains, although this time they've been complimented with a riff that has a whiff of TDCC about it. It's perhaps their poppiest number to date, and it sets them up nicely for the release of their debut album early next year.

"Jump Start" is out now, both as a download and as a CD Single.

Posted by Christopher McBride at 23:41