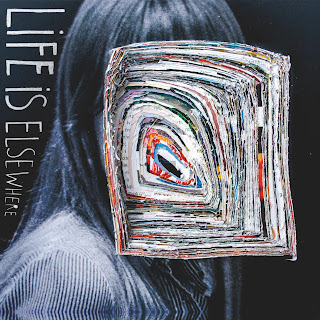 The sophomore album from Newcastle band Little Comets, "Life Is Elsewhere", has the sound of a band who have been given a new breath of life. Their debut album "In Search Of Elusive..." was released at the point where apathy towards British indie groups was at an all-time low, and went over the heads of many people. Subsequently, Mark Harle left the group in order to seek "gainful employment." Whilst all this might have been enough to bring a band to a grinding halt, the band used it as an opportunity to re-evaluate themselves and reformulate their sound.

The first fruits of their new approach arrived at the end of last year, with the release of  "Worry", a song that mixed Afro-beat rhythmic structures with a massive chorus that seemed to have been appropriated from 80s mainstream pop (in particular, Steve Winwood's "Higher Love"). The band followed it up in June with the spectacular "Jennifer", which will most likely go down as the greatest song that Little Comets will ever record, with its mix of heartbreak, angst, and a guitar hook which hits straight for the heart. It is these tracks which set the blueprint for the overall sound of "Life Is Elsewhere."

One of the most noticeable things about "Life Is Elsewhere" is that it eschews the straightforward rock rhythms that dominated the debut in favour of more unorthodox structures. Given that it was the band's drummer that left the group, this seems a somewhat surprising development. These include drum patterns akin to Kate Bush's "Hounds Of Love" album ("Tense/Empty", "Semaphores on the Lawn"), Paul Simon's "Graceland" ("The Western Boy") or Vampire Weekend ("Worry", "Waiting in the Shadows of the Dead of Night"). In fact, the only song on the album that seems to be somewhat conventional is "Woman Woman", and that's a song that features no percussion whatsoever.

This new approach to songwriting has also helped to quell one of the flaws that marred Little Comets in the past, the vocals of lead singer Robert Coles. In the past, his idiosyncratic vocal style didn't seem to suit the music, which is one of the reasons why it took me about a year before I could get any further than 10 seconds into their song "Joanna". This time around, his vocals seem to suit the style of the music a lot better, especially given the lyrical content involved on "Life Is Elsewhere".

Despite some flourishes of pop moments on the album, including the "Worry" and "Bayonne", the album is something of a sombre, dark affair. The band's self-described "kitchen-sink indie" is in full force on this record, with tales of violence, deception, and hurt being on full display. "Bayonet" features lyrics about being shot in the back, whilst title of "In Blue Music We Trust" is pretty self-explanatory.

The darkest moment on the album by a long shot is "Violence Out Tonight", a striking story about the brutality of rape. As someone who abhors violence against women, this song is one that will strike a chord, and Little Comets should be commended taking a stand against such brutality, as well as making the fact known that many of the transgressors remain unpunished, in the following lyric: "the poor conviction rate for rape can often leave a woman  feeling more at blame than able to talk about violence."

The 2nd album by Little Comets is one that sees them making seismic steps forward from their debut. "Life Is Elsewhere" is a mature offering of songs that are just as likely to make you think than move. It's an album that despite its bleakness, offers something reassuringly human at the centre. And it is an album that deserves to be listened to over and over again.

Posted by Christopher McBride at 16:05