Little Bear - The Devil Is a Songbird 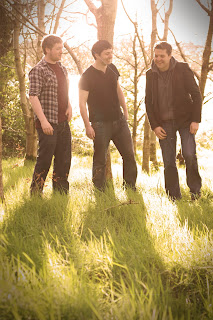 Although I have said it on numerous occasions, I think this is a point that bears repeating - in the United Kingdom and Ireland, the city that seems to be producing the most exciting new talent is Derry. And with its year as the City of Culture nearly upon us, it is well placed to showcase its breadth of talent to the world. Last week, I took to Twitter to ask my followers if there were any artists from the area that I hadn't featured on the blog in much detail that they would like me to mention, with the exception of Wonder Villains and SOAK, whom are taken as given. However, two artists that came up time and time again in the discussions happened to be...Wonder Villains and SOAK.

But in amongst those suggestions, there was one band that cropped up that I hadn't originally been aware of, and I'm glad that they've been brought to my attention. They are the folksy trio Little Bear. Their latest single is "The Devil Is a Songbird", is an achingly beautiful piece of music, featuring lovelorn lyrics and a haunting whistling hook.

The song is taken from the "I'd Let You Win E.P", which will be available to download from next month.

Posted by Christopher McBride at 14:28