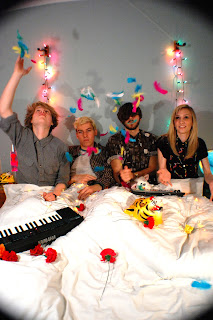 I recently had a go all those people who refuse to call The Wonder Villains pop, given that they feel the need to prefix it with anti-, indie-, or some other unnecessary term. Pop is not a dirty word, and artists should not be ashamed to label themselves as such. Having said that, it does make it rather awkward to talk about the next band. To paraphrase a rather well known sci-fi phrase, "it's pop Jim, but not as we know it."

Hailing from the South-West of England, Crash & The 'Coots* has released an E.P, "John Cole Park", that is very much a pop affair. However, these tunes have been passed through The 'Coots' own lo-fi, idiosyncratic filter, so that they are that little bit more tricky to characterize. There's elements of The Flaming Lips throughout the E.P, especially on "Emily (He He)", which calls to mind the bass of "It Overtakes Me."

Elsewhere, an alternative version of "Brian Fury Wins" (named after a character from the Tekken series) sounds like a 90s baggy track as recorded in a haunted house, whilst the set closes with a somewhat surprising Brigitte Bardot cover, which sounds like the most fun (and most coherent) song that Beck has recorded for quite some time.

Crash & The 'Coots have all the hallmarks of a great pop band. They've got some brilliant, tunes, exhibit a sense of unbridled fun, and aren't too bad looking either. But should we stop at pop, or should we try to affix something to the start of their name to point out their eccentricities? I'll let you be the judge of that.

"John Cole Park E.P" will be released on October 29th, both as a cassette and as a download.

*Previously known as Crash & The Bandicoots until they were made to change their name earlier this year. I'm presuming that it's because Naughty Dog are lining up a single by Crash Bandicoot as a potential song for this year's Christmas Number 1.
Posted by Christopher McBride at 21:02