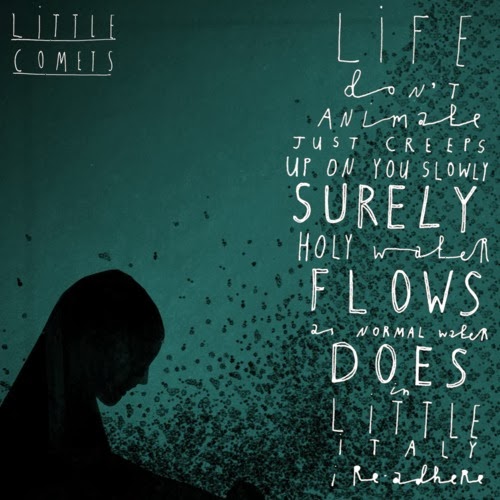 Back in 2012, Little Comets surprised this blog (and in honesty, quite a few other people as well), by releasing "Life Is Elsewhere", a breathtaking, surprisingly underrated album which ended up as our favourite album of the year. Now a year an a half later, during which time their Dirty Hit label mates The 1975 have gone on to international stardom, the band have announced they will be releasing 3 E.Ps and an album over the course of the year. Quite a treasure trove in store for fans of the band.

But as a great philosopher once wrote, naughty naughty, very naughty the journey of a thousand miles starts with a single step, and Little Comets' first step into 2014 comes in the form of "Little Italy". The song is a natural progression from the sound of their last album, keeping the unconventional rhythms and brash alternative-indie stylings intact, whilst elevating the confessional and political aspects that weren't as heavily touched upon to the forefront. As the band state on their blog announcing their yearly plans, "we’ve collected together four songs which are a lyrical representation of our opinions on life – all first hand accounts." Little Comets are genuinely one of the most interesting "indie" bands currently plying their trade in the UK at the moment. Let's hope that this year sees them get the mainstream breakthrough they so deserve.

"Little Italy" is taken from the E.P "The Gentle", which will be released as a limited edition CD on 23rd February.

Posted by Christopher McBride at 18:42