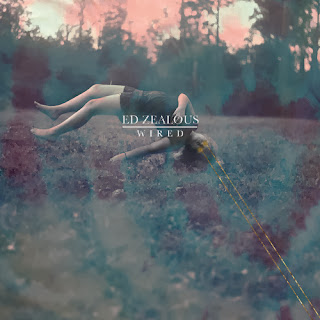 The release of the debut album by Belfast's Ed Zealous has been a long time coming. After all, they were being tipped for greatness as far back as 2008, and by 2012 it seemed as if they would never even get to the stage of releasing a full-length. They proved the doubters wrong by releasing an onslaught of new singles over the space of a year, and now in 2014 the band are releasing "Wired", which has been produced by Eliot James, who has previously sprinkled his pixie dust on records by Bloc Party & Does It Offend You, Yeah?. So does the album live up to the anticipation?

Yes. Yes it does.

Let's start with the singles. "Medicines", arguably the song that helped to boost their profile outside of Northern Ireland. is a storming slice of scuzzy electro-rock with a great big chorus. "Thanks A Million" sounds like a song that The Killers would be too scared to put their name towards (in a good way obviously). "Telepaths" is shred-tastic, whilst "Diamonds For Eyes", a song which has picked up a decent following on the blogosphere in the past month since its promotion from buzz track to fully fledged single, is the strongest of the lot, possibly because it's so sonically different from the others.

Which leads me on to one minor quibble with the album. The majority of the songs seem to fit into the same musical archetype - songs with fizzy, dirty electronics, pounding drum beats, great big choruses and a mid-tempo pace seem to dominate the album, with "Talk With Yours Hands", "These Words" and closing track "This Is Not The End" fitting nicely into this pattern. Of course, in the hands of Ed Zealous each of these tracks still sounds rather good in isolation, but over the course of an album a tiny bit more variety would not have gone amiss.

That's not to say that they don't try different things on the album. The album's opener "147" is what one might imagine The Prodigy would sound like if they ever tried their hand at an indie-rock tune, "I Will Destroy You" is like a less-shouty version of Crystal Castles, whilst the cheekily-titled "Videohead" sees the band tackle drum & bass with much aplomb, and must surely be a contender for single status once the album comes out.

It's been a long time coming, but "Wired" has been long worth the wait. Although the band do seem to play it slightly safe at times, the album is a great demonstration of their electro-rock nouse. Whilst it is still early in the year, you'd be a fool not to put money on "Wired" by Ed Zealous being named one of the best albums from Northern Ireland from the year come December time.

Posted by Christopher McBride at 07:30