The Harbourmaster - The Mega Yacht 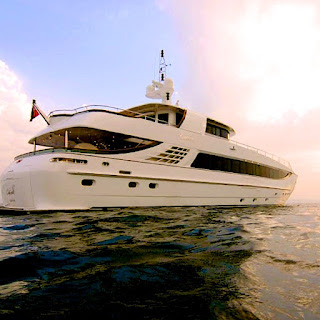 Dear All Around The World Records,

How are things going? I hope this message finds you well.

I'm guessing that you might be confused at receiving a correspondence from this blog. After all, up until this point mainstream Hi-NRG dance music has been something that has not been associated with either myself or The Metaphorical Boat. However, the truth is that cheesy dance music has been somewhat of a guilty pleasure of mine, something which I attribute to the fact that many of your artists were scoring big hits around the same time that our family's TV first got a music channel back in 2003 (e.g Ultrabeat, Eyeopener, Special D). Having been aware of your label for so long, I'd like to think that I have a decent idea of what your output should sound like.

It is because of this that I would like to draw your attention to a song by Wiltshire based musician Marcus Abott, who release music under the name of The Harbourmaster. The song in question, "The Megayacht,"  was brought to my attention recently via Tom Robinson's Twitter feed, and it immediately got under my skin. It's a great piece of summer filled house music that calls to mind some of the recent output by Avicii, in particular the song "Levels". So why I am I letting you know about this track?

Because it needs to be a hit.

I don't think I've heard a hook as infectious in a commercial dance track in quite a while, and I feel that given the right targeted promotion, it could easily become your next big hit.

Now I know you might be a bit wary of the hit potential of the track due to its current length of 6 minutes and 2 seconds, which is good for DJ play, but not for radio playlist purposes. However, I feel that it is possible to make a radio edit of the song to cut it down to your preferred length of 2 minutes 30 seconds so it can be easily slotted into commercial radio playlists. I suggest that the radio edit should begin 1 minute 58 seconds into the current version, with minor edits made throughout the rest of the song that ensure it doesn't lose its original charm.

If you do, rather wisely, decide to licence this track, I have a few recommendations as to its release. Firstly, please resist the temptation to hire a 'rent-a-rapper' to make the song more 'appealing' to UK radio audiences. I have seen many a good dance song ruined due to the perception that UK radio audiences can't handle an instrumental dance track (c.f  "Riverside" & "Badman Riddim"), and it would be a shame to see it happen to "The Megayacht".

Secondly, if a video is made for the track, I would like to see something a bit more high concept than several youngish girls acting provocatively. There seems to be a perception that just because music has been created on a computer that it should instantly appeal to the lowest common denominator. I am fully aware of the mantra that 'sex sells', but I don't think it would do justice to this song. As other dance artists like Fatboy Slim & Chemical Brothers have shown, its possible to make high-concept (and in some cases, low budget) videos that match the mood of the piece. I know that given the song title there would be the temptation to just film several scantly-clad girls partying on a massive yacht, but I would like you to resist that temptation.

I really hope that you take the time to listen to this song, as it deserves to reach the biggest audience possible.

Yours sincerely,
Christopher McBride.
Captain of The Metaphorical Boat.


P.S. Whatever happened to DJ Casper?
Posted by Christopher McBride at 19:25