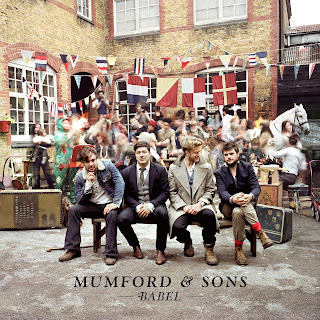 (Gentlemen of the Road/Island)

When Mumford & Sons released their debut album "Sigh No More" back in 2009, no-one could possibly have predicted the monumental success that would greet it. Emerging from the much hyped London folk scene alongside artists such as Noah & The Whale, Laura Marling & Jay Jay Pistolet, Mumford & Sons towered well above their peers, with "Sigh No More" selling in excess of 1.2 million copies in the UK and spawning two massive hit singles, "Little Lion Man" & "The Cave". Bigger things were to come, with the album becoming a smash hit in America, going double platinum and leading to the band performing with Bob Dylan at the Grammys.

Three years later, and the band are gearing up to release their sophomore album, "Babel". Much has changed in the intervening years. Whilst their peers have gone off in different musical directions (N&TW going mainstream rock, Marling going country & Pistolet becoming lead singer of indie darlings The Vaccines), the "Mumford sound" has become somewhat ubiquitous, with hundreds of groups emerging that have followed their anthemic, literate folk blueprint to the letter. So the question surrounding the follow-up is this: do Mumford & Sons alter their sound at the risk of losing followers, or do they stick rigidly to the sound of their debut record?

Well, given that the lead single for this album, "I Will Wait", is a re-recorded version of a track that first featured on the b-side of "The Cave", the answer to this appears to be, for the most part, the latter. Anyone looking for "Sigh No More" Mk2 will be very pleased with this follow-up. Many of the trademarks of the Mumford & Sons sound can once again be found on this record. The instrument set-up of banjo/guitar/bass/drums remains largely unchanged. So too is the band's tendency to start a song rather muted, before bringing in the drums & banjo to bring the song to a rousing climax (c.f  "Holland Road", "Lovers' Eyes", "Hopeless Wanderer"). The notable exception is "Reminder", which features just Marcus Mumford's vocals and guitar, which is the tenderest track on the record, as he sings about his "stoic mind and bleeding heart".

Some of the Christian lyrical themes that featured on the debut also appear on this album. "Below My Feet" features the lyric "I was told by Jesus all is well, so all is well". "Broken Crown", which is by far the angriest song on the album, alludes to both Judas and the story of Adam and Eve, whilst the title track, which no doubt is a contender to be the next single from the album, refers to the city in the Bible where everybody spoke a common language before being scattered across the world.

But despite recreating some of the ideas featuring on the debut album, "Babel" is still a worthwhile follow-up. For a start, the band sound a lot more confident than they did on the first album. The experience of several years of touring have had a positive effect on the recording of this album, with the tracks sounding as if they were designed for rousing shout-alongs at concerts.

The remarkable success of  "Sigh No More" and its subsequent influence on the music industry meant that Mumford & Sons are taking a risk by releasing an album which doesn't veer to strongly away from its blueprint. It is to their credit therefore that "Babel" is a more than worthy successor. When it comes to creating the Mumford & Sons sound, which is literate, intelligent, rousing folk music tailored for the rock crowd, there is only one band in the world that can ever reach those heights, and that is its originators. Whether album number 3 will see a seismic shift in their sound remains to be seen.

Posted by Christopher McBride at 20:45