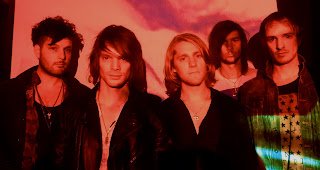 Hailing from the south of England, quintet Echotape have taken the concept of art-rock to a whole new level. This is because the music video for their latest single, "Spinning", also forms part of an art installation which is on display at the Tate Modern. The song itself is decent attempt to emulate a British version of The Killers, in particular calling to mind their song "All These Things I've Done."

"Spinning" will be released as a double A-side single on October 22nd, twinned with the more ambient sounds of  "Awakening".

Posted by Christopher McBride at 00:05