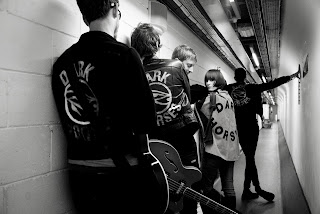 Hailing from Brighton, sextet Dark Horses seem to have a sound that treads the line between Garbage and The xx. Their latest single, "Alone", is produced by Richard Fearless from Death In Vegas, and mixes a forward thinking production style with an incredibly funky bassline, and vocals that go from vulnerable to powerful over the course of it's running time.

"Alone" will be released on October 22nd, with their debut album "Black Music" to follow on October 29th.

(N.B - Dark Horses should not be confused with Dublin band A Dark Horse, as featured on the blog back in June)
Posted by Christopher McBride at 15:09