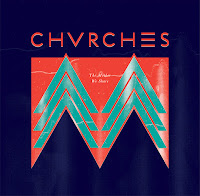 Scottish trio Churches (stylized as Chvrches for archaic reasons) seem to be ticking all the right metaphorical boxes for 2013 super stardom. Having first getting people's attention with "Lies" during the first half of the year, gaining the support of both pop fans and hip new music blogs, the group are now gearing up to release their latest single. "The Mother We Share" is a fantastic slice of sleek M83-esque electro-pop, buoyed up by singer Lauren Mayberry's girlish yet engaging vocals.

Posted by Christopher McBride at 13:56