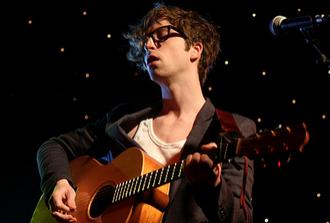 Remember back in November 2012 when we confidently predicted that Derry native Rainy Boy Sleep would be one of the artists to watch in 2013? (Of course you do. If not, here's the evidence). In the end, we got that one wrong, but from the looks of things, we were just one year out (in the words of the immortal Ken Bruce).

At the start of 2014, Stevie announced that he had signed a record deal with Universal Music Ireland, and so far this year he's played Glastonbury and been lucky enough to support the now cool again band The Waterboys on a string of dates. His first major label single to be released is "Ambulance", a song that seems to be aimed straight for the mainstream. It's a breezy yet dark acoustic-pop number which is made even better by the inclusion of a kid's choir providing backing vocals on the chorus.

I'm guessing that Universal's intention with this song is to give it a major push in Ireland, then once it catches on and becomes a hit (which is quite likely), use it as a springboard to allow Rainy Boy Sleep invade the airwaves of United Kingdom, then the rest of the world. And as far as we're concerned, "Ambulance" is the ideal track to get that particular ball rolling.