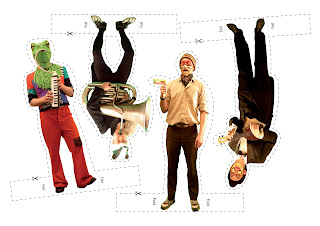 It's always nice to see new musical offerings from Leeds based quartet Biscuithead & The Biscuit Badgers. Their single "Seaweed Under the Sofa" was one of the funniest tunes of last year, I fact I learned to my detriment last year when I played the song on my radio show, only to burst out into fits of laughter for the next 2 minutes along with my co-host.

Their latest single, "Dinosaurs", treads a similar path to their last single, featuring ukulele, piano, and tuba powered basslines that would seem more at place in the music halls of the early 20th century than the present day. But as always, the greatest asset these biscuit-y fellows have is their devilishly fun lyrics. In the lyrics, they imagine how much better life would be if dinosaurs were still around, whilst acknowledging that if it did happen, they would probably wipe us out. It also contains one of the best, most bizarre lyric of the year, "You'll never see a tyrannosaur on the way to the shops, pretty much all of them have gone the way of Top of the Pops".

The group have also released a rather brilliant music video to accompany the release, has been shot in stop-motion animation and features the band as cardboard cut-out creations, which is an absolute joy to watch:

Posted by Christopher McBride at 00:08