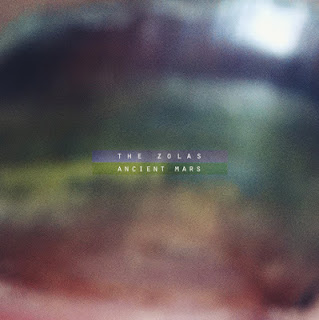 "Ancient Mars" is the follow-up release from Canadian duo The Zolas. Having previously been members of cult indie-rockers Lotus Child, the group released their debut album, the cabaret inspired "Tic Toc Tic", back in 2009. According to the band, they have "traded in the cabaret glitz...for reverbed pianos and tough, minimalist production" in the intervening years, something which shines through over the album's 40 minutes.

The album kicks off with "In Heaven", a track which kicks off with a simple piano line, erupts in a chorus of guitar lines before reaching a serene conclusion. This is followed by the album's stand-out track, "Hole In My Heart", which features a glorious, ELO sounding chorus and wonderful lovelorn lyrics.

Elements of spaced-out rock with a pop aesthetic appear throughout the record, which is quite apt given its name. The title track is a blissed-out jam with lyrics about wanting to be able to travel back in time, whilst "Escape Artist" goes from sincere piano balladry into something slightly far out over its running time. "Strange Girl" is the closest the band get to a proper rock track, in spite of featuring a Wurlitzer throughout, and "Observer", the album's other big pop number, features some wonderful uses of dynamics.

The only real disappointing tracks on the album are the ones that have been left to the very end. The minimalist, lo-fi approach to "Cold Moon" remains somewhat distracting and out of place given the music that has preceded it, and whilst bonus track "Cultured Man" does improve things a little, it doesn't live up to the earlier tracks' promise.

"Ancient Mars" by The Zolas is a decent album by a group who don't consider pop to be a dirty word. It's a record that features great choruses and well thought-out production, yet one that doesn't feel artificial or laboured.

Highlights: "Knot In My Heart", "Observatory".


Posted by Christopher McBride at 14:50