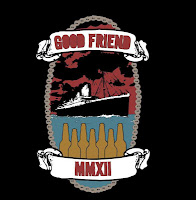 A couple of weeks ago, I travelled over to Newcastle (England) for a few days to meet up with some family over there. Whilst there, I had hopes of soaking up the local music scene and hopefully catching a few of the great musicians from the city that I had featured on the blog over the past few months, which have included Little Comets and Athletes in Paris amongst others. Unfortunately, I chose the wrong time to go over, as I didn't get the chance to see any of the artists I had hoped to catch. Although I did go to a great open mic night at Bob Trollop's, even if it was a little overcrowded.

Hopefully the next I'm in Newcastle (England) I will get the chance to catch some of the artists I missed, and catch a few new bands as well, such as Good Friend. Originally based in Coleraine, the trio relocated to Newcastle following the dissolution of former band Under Stars & Gutters.

The lead track from their debut E.P, "Dance On, Graves", seems to make reference to the break-up of their old band, as Adam Carrol sings that "we'll dance on the graves of the corpses of the people that we used to be." It's a track that is both angry and melodic in equal measure, and is a great introduction to the in-your face punk-pop for a band making a fresh start on the other side of the Irish Sea.

Posted by Christopher McBride at 22:04

Email ThisBlogThis!Share to TwitterShare to FacebookShare to Pinterest
Labels: newcastle