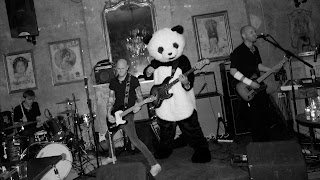 It's safe to say that any new material coming from the mind of Paul Coltofeanu, aka Free Swim, is something of a blessing. His last E.P release "Dennis" featured "The Smell of Pregnancy", a quirky, twinned-with-Bonkers track which is one of my top ten songs of 2012 so far. This week Free Swim released a new E.P, "She Dreams In Lights", which was inspired by "the dream-pop of Youth Lagoon, Washed Out & Mercury Rev."

The opening and closing tracks are perhaps the strongest songs musically on the record. Opener "Records in the Basement" is a rather enjoyable straightforward pop number with a bouncy rhythm, whilst the slow burning closer "The Snooze Function" is a cosmic love song worthy of a place on "Deserters Songs". However, it is on the songs in the middle of the E.P that the offbeat style of Free Swim really shines through. "Chumps Like Smee" seems like a sincere love song, but contains lines comparing the songs subject to amongst other things, house plants. "The Snooze Function" sounds as if the lead singers of Arctic Monkeys and Wild Beasts have been sent to the North Pole and made to write a song using a glacier for inspiration.

The highlight of the set is "Vuzuzela Venezuela", a jaunty tune that makes good use of Coltofeanu's unusual rhythmic rhyming structure, with offbeat lyrics ("the found the missing moon rocks with Leo Sayer's fortune teller"), great wordplay, and self-references aplenty ("they danced in adolescent glee to a brand new Free Swim E.P"). It's a great E.P from one of the most interesting, quirky songwriters around.

"She Dreams In Lights E.P" by Free Swim is available now as a free download.