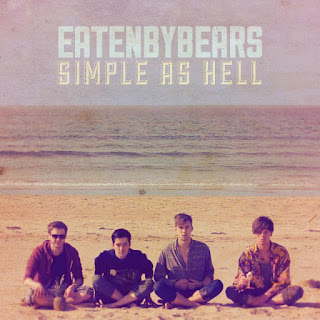 Belfast's premier shifty-pop band Eatenbybears have just unveiled their latest single, their first new material since the release of "Teeth E.P" back in October last year. "Simple As Hell" has been released to coincide with the start of the holiday season, and as such has a very summery vibe to it. Bongo percussion is prevalent throughout, with the main hook sounding as if it was recorded through a steel drum filter.

As the title might suggest, this is perhaps the poppiest song that Eatenbybears have recorded to date, although it does feature some of the band's familiar trademarks, such as its soaring guitar lines and abrupt changes in tempo.

"Simple As Hell" is out to download now, with the music video available to watch below: