So the Glasgowbury Festival is over for another year. Thousands of music fans, myself included, climbed up the side of a mountain for a wonderful celebration of the great local music on offer in Draperstown. With 50 bands playing over the course of the day from many different genres, there was something for everyone throughout the day. Here are my thoughts on the festival

It'll probably come as no surprise that my favourite performance of the evening came from The Wonder Villains. Despite some apparent technical difficulties during the set (during "TV", it seemed that Cheylene's keyboard was not turned on), they put on a wonderfully energetic set. They even debuted a new song, which is about Bruce Springsteen.

Ska-punk group Pocket Billiards put in a great performance on the Small But Massive Stage, which really got the crowd going. Eimear from the aforementioned Villains got on the already crowded stage to sing lead vocals on one song.

Derry singer/songwriter Soak was one of the few artists who played twice during the festival, once before the festival officially began to pre-record a live set for BBC Radio Foyle, and once during her set on the G Spot Stage. Such was the anticipation for her performance that the tent was already crowded five minutes before she took to the stage.

Elsewhere, folk group Sons of Caliber put on a reliably strong performance, the lullaby-folk of The Jeppetos was gorgeous, and Best Boy Grip were also enjoyable.

Although it wasn't musical, seeing a festival goer dressed up as the titular character from Hayao Miyazaki's film My Neighbour Totoro brought a smile to my face.

The great thing about the festival is coming across artists that you had never heard of and falling in love with them. Limerick band Fox Jaw Bounty Hunters really blew me away with their riff-heavy melodic rock. Think Queens of the Stone Age covered in daggers and it gives you an idea of their sound. It was a pity that you could count the amount of people in the tent by the end of their set on your digits.


Another band that impressed me were brassy septet Dead Presidents. They've got an upbeat sound that mixes funk, soul and jazz, with lead singer Matthew Wilson sounding like a young Van Morrison. The crowd loved their performance as well, with the crowd carrying Matthew at the end of their set. Also great was Wexford based Ian Doyle, aka The Man Whom, who performed solo with an acoustic guitar and a loop pedal to create live backing tracks on the fly.

Also, it was great to discover that a former classmate of mine is the new viola player for Rams' Pocket Radio, playing his debut gig for them during the festival.

Due to the nature of clashes of festival times and other factors, there were a few acts that I would have liked to see but missed out on, Including RunawayGo, The 1930s, Droids, The Japanese Popstars, and perhaps most annoyingly of all, the headliners Therapy?. If you managed to catch any of these artists on the day, feel free to let me know how awesome they were/weren't.

I didn't see a single piece of fruit for sale at the festival. Although there were three burger stands, two coffee places and an ice-cream truck. 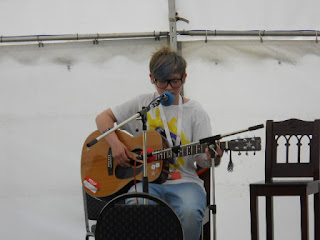 SOAK playing just before the festival officially got underway. 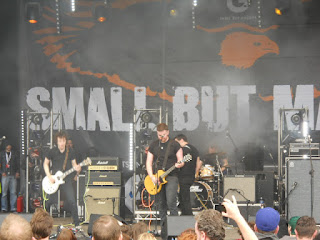 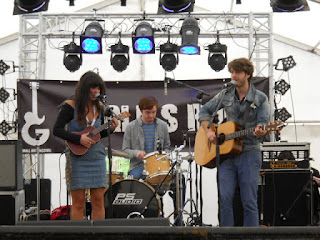 The cutesy folk of The Jepettos 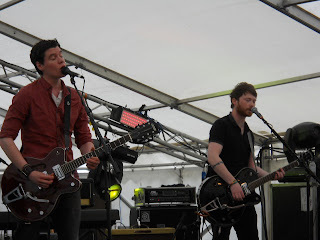 Limerick's Fox Jaw Bounty Hunters, one of the surprise packages of the festival. 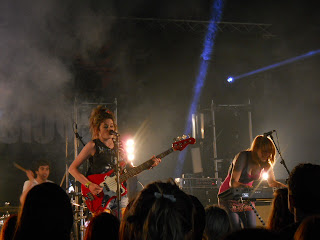 The lovely ladies from The Wonder Villains 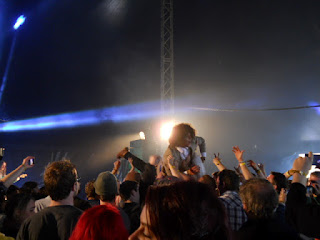 Matthew Wilson of The Dead Presidents enjoying a surf. He lost his tie in the kerfuffle. 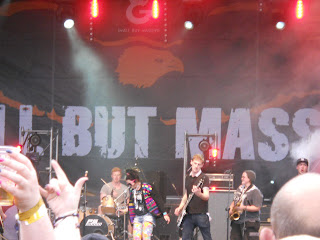 Pocket Billiards with Eimear from The Wonder Villains. 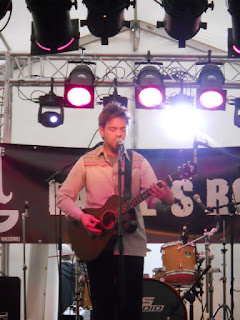 Acoustic loop madness from The Man Whom