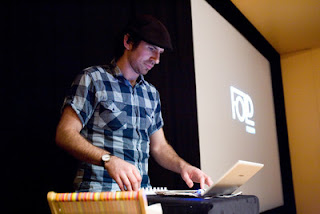 If the critical success of Public Service Broadcasting releases are anything to go by, then it is clear in 2012 there is still a hunger for using spoken word samples as a launch point for musical ideas.

In addition to the aforementioned PSB, another artist using samples in this way is Leeds based group Fold. Fronted by producer Seth Mowshowitz, they take a more political approach to their work, using samples as a springboard to bring about social justice, although in a way that they claim is neither preachy, pretentious, or conceited."

Their latest single, "Mr President, We're In Trouble", features vocal samples from former U.S President Jimmy Carter, which acts as a biting inditement of over-consumerism. Even if you're not overtly political, then there's still a lot to like in this song, with the hard hitting production reminiscent of a less-polished Lemon Jelly.

"Mr President, We're In Trouble" will be released as a 7" single on September 3rd, with 75% of the proceeds going towards charitable causes.