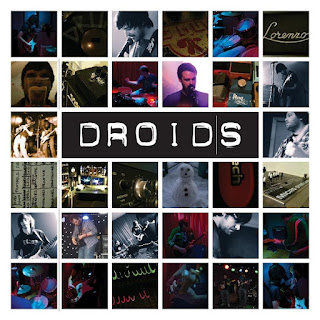 Of all the wonderful artists from Derry that have been making a mark in 2012 (of which there are many), perhaps the loudest and most riff-heavy outfit have been four-piece Droids. Their first few tracks have picked up by radio stations and bloggers alike (including this one), and now they are about to unleash their self-titled E.P on the unsuspecting public.

Although admittedly I am not a big fan of metal in the slightest, I have to say that the E.P is an rather interesting one. The guitars have been set firmly to 11 most of the way through, and the vocals tend to be a little on the shouty side. But what is great about the release is that despite the noise, the band have never forgotten the importance of a strong hook and melody.

The towering riff of "Astromech & Protocol" is still as strong as it was when it was first unleashed, and the heavy-funk inspired riff of "God Doesn't Grant a Steady Hand" has a sleek groove going for it. The final track on the E.P, "Recognizer", is perhaps the strongest song on the release. Over the space of six minutes, it goes from an inconspicuous beginnings into a cavalcade of power over its running time. It's a very powerful introduction to the robotic rock of Droids.

"Droids E.P" will be available as a free download until Monday. It will be officially launched on August 16th in Sandinos Bar, Derry. Support comes from Gascan Ruckus and The Wood Burning Savages.