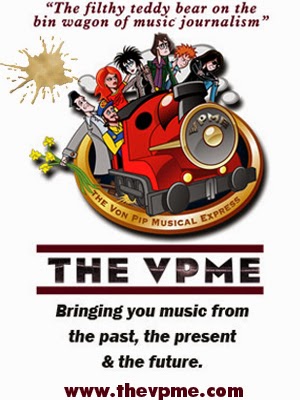 Over the next few months, The Metaphorical Boat, alongside Drunken Werewolf, The VPME, The Blue Walrus & God Is In The TV, will be looking at some of the music that our fellow music bloggers have been raving about as part of the Blog Collective. Each month, we will be focusing on one of the music blogs in the Collective and picking out a few artists  from said publication that we think you will enjoy.

In May, the focus is on The VPME, the Liverpool based blog run by Andy Von Pip. The blog tends to feature a lot of post-punk and jangly indie-rock, genres that TMB very much approve of. The VPME was one of the first music blogs that I would take the time to read on a daily basis whenever TMB first got going, so it's fair to say that it's a blog I have a lot of respect and love for (especially given that it's written quite a bit about one of my favourite local bands, Wonder Villains). He's also pretty funny and biting in equal measure on Twitter, so well worth a follow if you're in to that thing.

Cruising - You Made Me Do That

The VPME - "‘You Made Me Do That’ is a grimy, brooding depraved slice of f***** up distorted subterranean punk which crowbars your skull open."

TMB - Given that the band is a supergroup containing members of fantastic Irish bands Girls Names, Sea Pinks & September Girls, it's fair to say that we're going to like this one. "You Made Me Do That" is a primal, snarling, lo-fi, chainsaw-buzzing gem of a track that will get under your skin.

TMB - If you're a fan of the Yeah Yeah Yeahs, then you'll find The Beaches and "Little Pieces" an insatiable prospect

The VPME -  "...there is a tangible sense of righteous anger burning away at the core of their glorious incendiary post-punk noise."

TMB - the fact that they're named after an early session track by The Cure should tell you everything you need to know about the London band. "Happening" is a wonderfully luscious post-punk tune, albeit one that doesn't neglect its melodic centre.

The VPME - "sounds like the Sisters Of Mercy colliding with Nirvana"

TMB - Even without their familial connections (as The VPME points out, the lead singer of the band's brother is in The Horrors), it's safe to say that Loom were always going to do well. "Yosoko" is a great, uncomplicated rock tune that's happy to get straight to the point.

The VPME - "...whilst it may throw the occasional nod to Lana and compatriot Lykke it also manages to sound refreshingly avant-garde and slightly off the wall."

TMB - Yes, the vocal similarities to Ms Del Rey might be a bit distracting to some people, but unlike her, there's a real sense of playful fun within "Swedish Strawberries".

Posted by Christopher McBride at 14:03