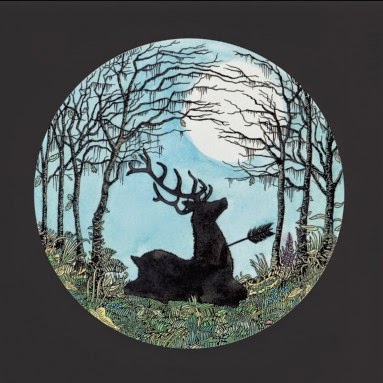 Bridie Jackson & The Arbour are a folk four-piece from Newcastle. Although they released their first album back in 2012, it has only really been in the past twelve months that they have really started to take off. They've released several well-received singles, beat out over 8,000 other bands to win a slot at Glastonbury, recorded sessions on BBC Radio 2, and somewhat oddly, won a North-East Museum Award. All this has culminated in the release of their sophomore album, "New Skin".

The first thing that really stands out on "New Skin" is Bridie's vocals. As I mentioned last year when reviewing their single "Prolong" (which makes an appearance on this album), "Bridie Jackson could sing from the directory of phone directories, and still we would hang on to every single syllable as if it was the most beautiful thing in the world". This can be heard throughout the album, be it on the album's string laden title track, the sinister-playful musings of "Scarecrow", or the closing track "One Winter Evening", Bridie has a voice that warrants attention, one that really speaks to the heart, whether those feelings are of the dark, or of the light.

There's a few other great tracks on the album that are worth highlighting. "Diminutive Man" is perhaps the closest thing to an 'upbeat' track on "New Skin", with its country-ish bent, handclaps and fiddle coming off like a close companion to Laura Marling circa "A Creature I Don't Know". Meanwhile, "Sandgate Dandling Song" sees the band take an obscure folk song, originally written by a 19th century Tyneside musician, and reinterpret it through their own haunted, closed-harmonised gaze. In all honesty the song seems somewhat out of place with the other songs on the record, but in spite of this (or possibly because of it), it is the most irresistible tracks on it.

"New Skin" by Bridie Jackson & The Arbour is a fine example of the more haunting, introspective side of English folk music. It may not be the sort of album that is easy to get into on first listen, but if you give it time to grow, and immerse yourself it the worlds created within it, you will uncover something very special indeed.


Released: 5th May 2014 - available to purchase from the band's website.

Posted by Christopher McBride at 12:33