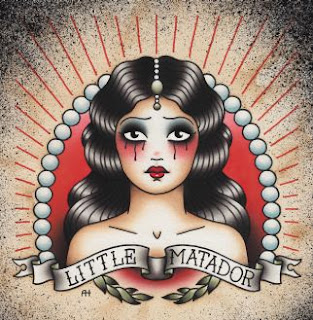 For a band that has barely been together for a year, Little Matador sure have racked up some impressive support slots. So far in 2013, they've warmed up for Nine Inch Nails, Jimmy Eat World, and will be opening for Queens of the Stone Age at their gig in the Odyssey Arena in Belfast on November 18th. Of course, given the caliber of the artists involved in the band, it's no surprise that they've made the leap to the big leagues so soon.

Little Matador is the new project of Nathan Connolly, who is best known as the guitarist for the biggest Northern Irish band of the last 10 years, Snow Patrol. Joining him in the band is Troy Stewart (The Windsor Player), Gavin Fox (formerly of Idlewild), Binzer Brennan (ex-The Frames) and Dave Magee of heavy rockers Lafaro.

Their first release as a band is "Liar Liar", a 4 track sampler of songs that will feature on their upcoming debut album, due in 2014. Of the sampler's tracks, the highlights are "Reasons", an electro-glam rock stomper with an infectious chorus, and the driving punk sound of "Liar Liar". It's a fairly strong introduction to the band, with the tracks almost certain to make them an exciting live draw over the next year or so.

The "Liar Liar E.P" is currently only available to buy from Little Matador's live shows. The title track is available as a free download from the band's website.

Posted by Christopher McBride at 15:47