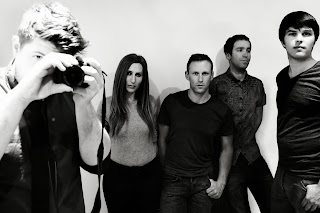 You just can't help but take notice of a band that describe themselves as "Nine Inch Nails playing Buddy Holly songs, with a string section." That is the sound that Irish 5-piece Clockwork Noise appear to be aiming for on their latest single "The Tourists". And although it might not exactly sound like that, it's still a rather great piece of music nonetheless.

The song sees Clockwork Noise making full use of quiet/loud dynamics, with the serene yet slightly menacing string arrangements during the first part of the song becoming slowly punctuated with moments of noise, before ending the song on a noisy, unexpectedly indie-poppy moment.

"The Tourists" is taken from the band's album "Whethermachines", which is out now.


Posted by Christopher McBride at 10:56