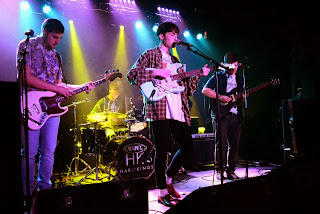 It's fair to say that Nottingham has had its fair share of decent artists to either emerge or grow in 2013. Jake Bugg is selling out stadiums, London Grammar have been picking up the critical plaudits, whilst newcomers like Amber Run and Kagoule are setting up their stall for the future. And let's not forget A Plastic Rose, who have come on by leaps and bounds since relocating to the city.

Another Nottingham newcomer that has been picking up a bit of interest recently is 4-piece Huskies. Having recently been tipped by Huw Stevens, the band look likely to make a mark over the next 12 months, based on their latest single, "Beach". It is a sterling slice of dreamy guitar-pop which calls to mind Swim Deep, and strangely enough the song "Closing Time" by Semisonic.

"Beach" is available as a free download. For an insider's look at emerging Nottingham bands, check out this enlightening feature on Drowned In Sound.

Posted by Christopher McBride at 13:40