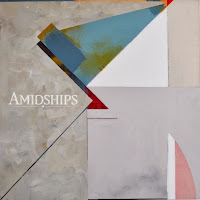 After a relatively quiet 2012 for Amidships material-wise, 2013 has seen the Belfast collective in a more fruitful state, and as reaped the benefits as a result. The release of "Lost" and "Forever Here" earlier in the year led to a renewed interest in the group, with the former track being used extensively in adverts for the BBC NI television series 6 Degrees, which I am informed is a very good show indeed.

And now the group have released a new single, "Oceans". The song is one that should be familiar to Amidships' long term admirers, as it originally featured in a radically different acoustic version on their debut E.P in 2011 under a different title. Now rejigged for 2013, the song is a swearier, slow building track that mixes emotive strings with heavy, National-esque guitars in the song's deafness-inducing final 90 seconds.