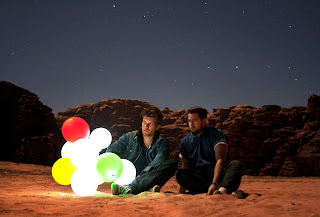 Hailing from Warwickshire and based in London, duo Thumpers have been described as "colourful, exuberant pop...(which) celebrates their innate musical kinship and shared memories from their childhood." Having already released their debut single "Dancing's Done" earlier in the year, the group have now released their first E.P, one which features the production skills of a Mr David Kosten (Everything Everything, Bat for Lashes).

"Unkinder (A Tougher Love)" is the semi-title track of the E.P, and is a great representation of the group's modern pop sound. The song has a strong chorus, helpfully aided by the backing vocals of one of the members' sisters, and a rather welcome guitar solo, something which seems to have almost died out within the indie-pop landscape. And rather surprisingly for a band called Thumpers, the song is quite a breezy, laid back affair. There's much to enjoy with this group, and I very much hope the group can continue with their wonderful noise.

The "Unkinder" E.P is out now as a download and limited edition 12" vinyl.

Posted by Christopher McBride at 20:43