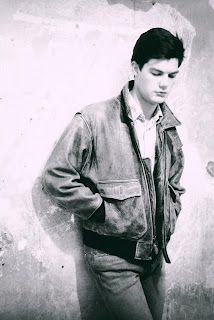 Given the finite amount of words and letters that exist within the English language, it is likely that at some point, there will be several musical acts who end up recording under the same name, as the Blue lawsuit proved a few years back. When I heard that Chapterhouse, the "Pearl" hitmakers who were one of the leading names of shoegaze in the early 90s, had a new track out, my interest was piqued. However, I soon found out that this act was in fact Chapter House, a project from Bristol native Joshua Vincent which counts fellow Bristolians Seasfire as admirers.

But despite the confusion, this Chapter House is creating some fantastic songs, like their latest single "Getaway". Despite being self-described as a bedroom demo, the sound is very deep and ambitious. M83 would be its nearest music equivalent, as the track features smashing drums, electronic centred production and heavily distorted ethereal backing vocals. There's also a Simple Minds feel to it, especially in the lead vocals, which have a real 80s vibe to them.

If this version of "Getaway" really is just a bedroom demo, then it should have everybody salivating at what the fully realised version of this project will sound like. It's impressive, ambitious, and sounds very much of its time. He might not be recording under the Chapter House moniker for much longer, but do keep an eye out for the name Joshua Vincent. We'll probably be seeing a lot more from him over the next few months.