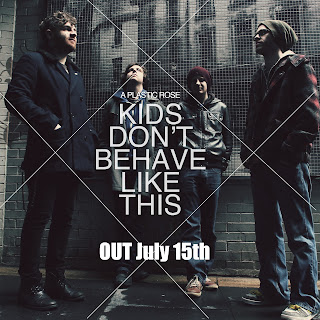 One of Northern Ireland's best loved local bands of the past few years, A Plastic Rose, have now upped sticks and moved permanently to the mainland, setting up home in Nottingham, the home of Jake Bugg, Robin Hood & Boots the Chemist. They haven't forgotten their roots though, as the music video for their first post-move single, "Kids Don't Behave Like This" wistfully reminds us.

The music video was shot a few years ago in Malone Avenue, Belfast, a single-shot video which features the band doing all the things your mother warned you not to do, like running in front of cars, knocking down bins and eating leaves, interspersed with the band performing in front of a crowd of friends and fans. A few bands from the local scene make appearances, like More Than Conquerors and The 1930s, whilst eagle-eyed Radio 1 enthusiasts might notice a certain Mr Phil Taggart in the background at several points.

Whilst it might seem odd that the band chose to use this video to promote their first UK wide release, it actually is a particularly inspired choice. "Kids Don't Behave Like This" is the band's strongest song and arguably their signature track, one with soaring guitar lines and a refrain which just implores you to sing along. The video captures the energy, the passion and the devotion that A Plastic Rose has inspired among the people of Belfast. And if just some of that magic can be re-bottled and released on the other side of the Irish Sea, then maybe the band can become the household names they deserve to be.

"Kids Don't Behave Like This" will be released on July 15th, and is taken from their debut album "Camera.Shutter.Life".


Posted by Christopher McBride at 20:49