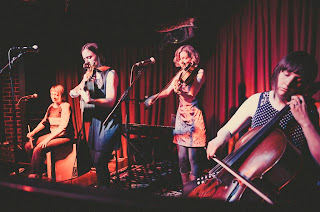 By now, everyone who is going to this year's Glastonbury Festival is either already on their way or is getting ready to make the journey there, hoping to catch The Rolling Stones, Arctic Monkeys, or any of the other big names scheduled this weekend.

One of the names further down the bill that has got a lot on tongues wagging is Bridie Jackson & The Arbour, a Newcastle based four-piece who beat out over 8,000 other artists to win a place at the festival. Some of our favourite bloggers have been raving about the group for many months, so it's only fair that we take the time to check them out. And what better time like the present, as by a remarkable coincidence, the group have announced the release of a new single, "Prolong", the week they will be playing some of the biggest gigs of their lives.

The song is a tender, gentle track which strips the folk sound back to just strings, classical guitar, and voice. And what a voice it is. Bridie Jackson has the voice of someone who has seen a lot in this world, whilst simultaneously sounding as if she has been transported from another. They say that some singers could sing the phone directory and make it sound interesting. Bridie Jackson could sing from the directory of phone directories, and still we would hang on to every single syllable as if it was the most beautiful thing in the world.

"Prolong" by Bridie Jack & The Arbour will be released on 29th July.

Posted by Christopher McBride at 18:07