Black Casino & The Ghost - I Like You Cause You're Free 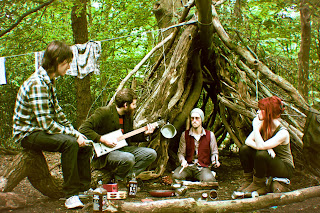 When your group is called Black Casino & The Ghost, it's very unlikely that you're going to get happy-go-lucky songs about sunshine, daffodils, and eating too many sweeties. The London based 4-piece describe their music as being about "isolation, disorientation, lust, and how to fly a plane through turbulence without spilling your coffee." Having released a well-received E.P in late 2011, the group have released a new single to foreshadow the release of their debut album.

"I Like You Cause You're Free" is a piano-led song about the fallacy of modern communication, about living in a time when "all we are is what we choose to hide from each other". Despite the dark subject matter, the song is actually quite enjoyable, something that can be put down to the almost Beatles-esques production and chord progressions. The last minute of the song has a "Hey Jude" feel to it, albeit one with a jet black streak running through its DNA.

"I Like You Cause You're Free" is available to download for free, and is taken from their debut album "Some Dogs Think Their Name is No", which is due for release in September.

Posted by Christopher McBride at 14:19