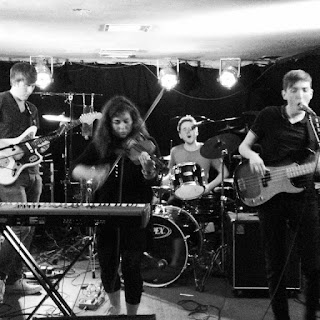 With so much electronic music coming out of Glasgow at the moment, it's nice to hear a band adding something a little bit more organic to the mix. Lost Ghosts, a self-described post-pop group, have just released their debut single, "Tunnels".

The song is a strange beast indeed, as it's not immediately clear what it's supposed to be. It starts as an atmospheric synth-led track, yet this is instantly uprooted once the violin lines are added to the mix. It then appears to go into the raw style of The xx, something which it instantly betrays by going straight into classic rock guitar solos. The final two minutes sees the group attempting an anthemic yet restrained sound, like Frightening Rabbit channeling the spirit of Kings of Leon.

There are a lot of different ideas thrown into the melting pot on this first single by Lost Ghosts. It's an ambitious debut, and one which should make people take notice of them, but at the same time, hopefully their next few releases will be a bit more focused.

Posted by Christopher McBride at 11:05