To Kill a King - Word of Mouth E.P 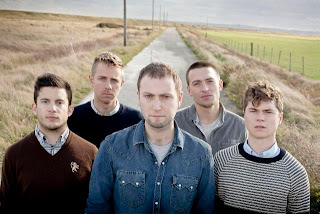 I can only guess that London based group To Kill a King have given their latest E.P the title "Word of Mouth" in the hope that those who listen to it and enjoy it are encouraged to pass it along to their friends and followers so that it becomes a, ahem, word of mouth success.

Thankfully, the band doesn't need to rely solely on (un)subliminal messages to encourage people to share the E.P, as it stands on its own as an incredibly strong set of songs, which could be best described as astral folk. Lead track "Howling" is a slow-building track, which goes from Bon Iver to Arcade Fire, by way of Wild Beasts, with "Wolves" and "Funeral" following a similar grandiose pattern. "Besides She Said" shares the same sort of elegence with Noah & The Whale's "Blue Skies" album, whilst the set closes with a cover of Feist's "Let It Die", which has been stripped down to the bare bones.

The only real weak track on the E.P is "Rays", which sounds like Editors being left on auto-pilot. That track aside however, "Word of Mouth" is an incredibly strong release, and one which should see fans of their music waiting with baiting breath for their next record, so that they can pass it along.

"Word of Mouth E.P" by To Kill a King is out now as a free download, with 500 hand-printed copies also available.

Posted by Christopher McBride at 14:36