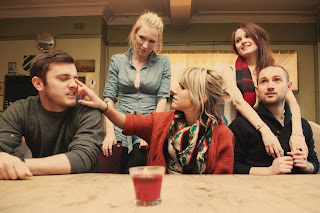 Following the June release of the promo single from the group's upcoming debut album, Kent group Keston Cobblers' Club have released the latest song which will feature on the album. "Your Mother" is a great slice of summery folk, but what is really great about the release is the video the band shot to coincide with the release.

The music video, which is shot in one unedited take, is set in a Jungle Jims, and follows what appears to be a young women wearing a fox mask playing in the facilities whilst surrounded by other dancers. It is choreographed superbly, featuring a rather memorable dance routine, and a rather intricate 'cup dance'. It looks as if it was an incredibly fun video to make, and without sounding premature, it could possibly be the best music video I will see all year.

"Your Mother" is taken from Keston Cobblers' Club's debut album, "One, For Words", which will be released on August 27th.