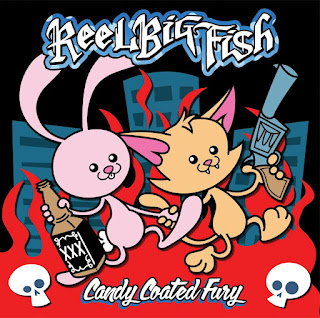 Like many people of a certain age, I was first introduced to the California ska-punk band Reel Big Fish when two of their songs, "Beer" and a cover of a-ha's "Take On Me", featured in the severely underrated 1998 film BASEketball, starring Trey Parker and Matt Stone of South Park fame. "Sell Out" became familiar to me when it featured as the loading music for the Playstation game Fifa 2000, and I've slowly became acquainted with the rest of their back catalogue after picking up their "best of" album, which due to licencing issues contained re-recordings of their most well known songs. After five years, the band have released their 7th studio album, "Candy Coated Fury", which has been described as a "return to the hyperkinetic ska and biting wit of the band’s beloved early albums."

Most of the songs on the album follow a similar musical pattern - sardonic, sly, bordering on negative lyrics which is juxtaposed with bouncy, brass led melodies and a reliable ska-rock rhythm section. This blueprint is used to the greatest effect in songs such as opener "Everybody Else Is an Asshole", "Your Girlfriend Sucks" and "I Love, You Suck".

Some of the more interesting moments on the album happen when the band move away from this blueprint into less straightforward territory. "I Dare You To Break My Heart" was inspired by the band's attempt to write a song inspired by The Darkness (making Reel Big Fish one of the few bands to be PROUD of being influenced by that group) adds elements of glam-rock and 80s hair metal into the band's ska-punk style, whilst "Hiding In My Headphones", which features guest turns from Coolie Ranx and Sonic Boom Six, adds a reggae hip-hop element to the mix.

Like the band's other albums, "Candy Coated Fury" features two ska cover versions of 80s hits, "Don't Let Me Down Gently" and " The Promise". These covers might not be as good as the originals by The Wonder Stuff and When In Rome respectively, but they do sound rather good when performed in the band's idiosyncratic style.

After performaning for over twenty years, the chances are that if you have been a fan of Reel Big Fish up to now, then you will probably find much to like in the dependable "Candy Coated Fury". And if not, then you are missing an incredibly fun, upbeat, yet angry album.

Highlights: "Everyone Else is An Asshole", "Don't Let Me Down", "I Dare You to Break My Heart".

Posted by Christopher McBride at 19:02