Amateur Historians - These Cities Are Stealing My Soul 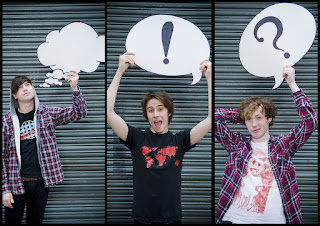 Short, irreverent indie-pop is the order of the day for Belfast trio Amateur Historians. Formed over the internet, their new single, "These Cities Are Stealing My Soul", is a sub-two minute burst of youthful energy that expresses the desire to escape from the city of your birth. It's off kilter rhythmic chop-and-change approach, as well as its upbeat charm, despite its rather downcast lyrics, calls to mind Vampire Weekend, Los Campesinos and, dare I say it, a little bit of early Ash as well.

"These Cities Are Stealing My Soul" is taken from Amateur Historians' debut E.P, "New Homes/New Hopes", which will be released on CD/download on August 15th.

Posted by Christopher McBride at 13:23