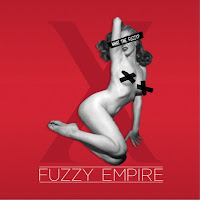 In my review of the last single by Dublin based trio Fuzzy Empire, I indicated that "Contraband" could act as a new 'Ground Zero' for the electronica group. Little did I know that the band, now signed to Swedish label Substeam, would do a complete u-turn from the latter's electro-punk styles, and release a song that's more R.E.M than LCD Soundsystem.

Their latest song release, "Chroma" still has the hallmarks of a Fuzzy Empire song, with interesting uses of electronic noodling (the main keyboard riff is taken from manipulated samples of guitar harmonics), and an intense, driving rhythm. Other aspects of their sound have changed, with the structure of the song being a lot more 'traditional' than their other songs, and the vocals of Emmet, which have a Michael Stipe-esque quality to them, take centre stage for the first time. Fuzzy Empire are a criminally under-rated group who seem to completely confound my expectations with each one of their releases, which can only make their upcoming releases a joy to behold.

"Chroma" will feature on their upcoming E.P, which will be released in September on Substream Records.