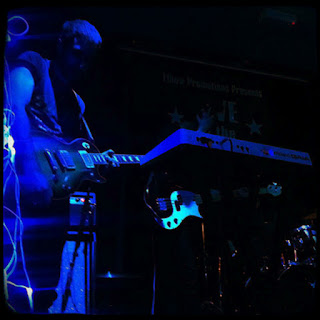 When sending music out to music bloggers, make sure that your music fits in with the preferences of your target audience. It's a simple, important piece of advice, but it is still one that so many artists still mess up on. I get sent a lot of remixes of popular songs, quite a few songs in the rap/hip-hop genres, and a disproportionate amount of covers of Lana Del Rey tracks, areas of music that I have absolutely no interest in writing about. Of course there are exceptions, but the chances are that if you are one, then I will come across it on my own.

All of this of course is why I am delighted to see a song drop through my inbox that could not possibly have been better targeted at me. It comes courtesy of Emma, a four-piece band from North London, who describe themselves as 'psychedelic electronic rock.' While that description is enough to pique my interest, what sold them to me is the name of the track in question: "Perfect Blue".

For those not aware, Perfect Blue is a 1997 Japanese animated film, which tells the story of a young women who is plagued by murderous delusions after she leaves her career as a pop singer to become an actress. The film proved influential, especially on director Darren Aranofsky, whose film Black Swan has been described as "Perfect Blue with pirouettes." It was directed by the late Satoshi Kon, who is one of my favourite directors of anime. In fact, my university Film Studies dissertation looked at the role of female characters within this film, Millennium Actress & Paprika.

So how does the song match up to the film? It does a good job of encapsulating the paranoia and feelings of identity loss featured in "Perfect Blue", through its mechanised instrumentation and its otherworldly vocal effects, calling to mind a much moodier version of M83. The band have only been together for a few months, but with such a promising (well targeted) introduction, they look like they could make an impact.


Posted by Christopher McBride at 21:17