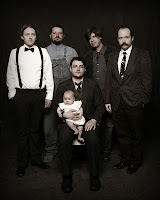 Between 2010 and 2011, I spend 10 months in Nebraska studying at a liberal arts college as part of an Northern Ireland/U.S.A exchange programme. One of the purposes of the programme was to hold lectures to educate Americans on life in Northern Ireland. For me, this meant an opportunity to educate Nebraskans about the rich history of music from our great place, from Them to Snow Patrol and everything in between, which includes The Undertones, Stiff Little Fingers, Therapy?, The Four of Us, Ash, Divine Comedy and, for a laugh, Baltimora. Whether I did a good job of spreading the word of our music remains to be seen, but if we see a band from Nebraska contributing to a tribute album to "1977" in the near future, then you know I did a good job.

But anyway, I'm digressing slightly from my main point, which is to introduce you to The So-So Sailors, who seem to have taken the opposite path to myself. Based in Omaha, Nebraska, the group are currently signed to Belfast based label No Dancing (the home of The Wonder Villains & Elspeth), and show off their Midwesternly charm with their first single "Des Moines", which is currently available as a free download. The track is a sprawling, slow burning track that calls to mind a chilled out Bruce Springsteen. It's an understated, yet highly effective introduction to the band. If The So-So Sailor's are indeed Nebraska's musical ambassadors to NI, then they have done the Cornhusker State very proud indeed.

"The Young Hearts E.P" will be released on June 10th.

Posted by Christopher McBride at 23:59