Ourlives - Where is the Way? 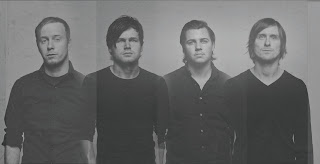 Here's a question for you - how many Icelandic artists can you think of that are well known outside of their home country? I'm sure many of you could make it to one with Bjork, possibly two if you remember Sigur Ros. If you're a real smart-arse, you could probably add múm to that, and if you have a penchant for cheesy late 90s pop singers with big hair, you could add the oft-forgotten Alda to that list.

Yet Iceland houses such a vibrant group of exciting artists, making very interesting sounds. Which is where Reykjavik quartet Ourlives come in. With a critically acclaimed album already under their belt in their native country, the band are releasing their first international E.P. Taken from it is "Where Is the Way?", which is currently available as a free download. The song is a welcome introduction to the band's world, a track that builds up into a crescendo of force. It's epic, but without sounding too overblown, plus it has something that is oft-neglected in songs where guitars are the main driving force - tight vocal harmonies. Along with the rest of the E.P, it's a cracking introduction to the band, and on the strength of it, they could go on to match their fellow countrymen in the popularity stakes.

"Where Is the Way?" is taken from the "Out of Place" E.P, which is out now on Spartan Records.


Posted by Christopher McBride at 23:55