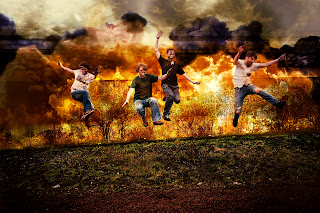 After March's release of "Build From The Ground Up", which in a rather novel move was only released as a physical single, Belfast 4-piece A Plastic Rose are gearing up to release their second single of 2012.

Abandoning the majesty of its string-laden predecessor, "Boy Racer" is instead a ballsy-rock number, complete with dentist-drill guitar riffs (the good kind), intriguing uses of the quiet/loud dynamics,  and another one the band's trademark anthemic choruses. I do enjoy the heavier side of the band's arsenal, and if they can continue such a varied path on their releases, then their upcoming album could end up being the most exciting release on this island in 2012.

"Boy Racer" will be released on June 18th, and will feature on A Plastic Rose's debut album, "Camera.Shutter.Life", which is due out this summer.